Do you know what gets you a “NO” from Senior Leadership? 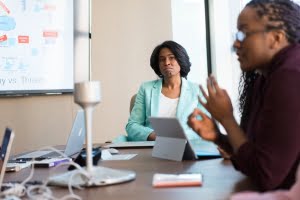 Well, neither did John.

So here is the situation:

The company had a hiring freeze going on.

John wanted to go to his VP and discuss the idea of restructuring his sales team. The restructuring would eliminate three positions while adding two positions at a lower level. The company had a hiring freeze at the time.

John went to his boss to see if he could propose his idea to the C Suite but his boss became super defensive and squashed it.

John asked us why that happened.

With a hiring freeze on, it typically means any headcount going out will not be replaced. So, although John could get by with the lower-level positions, perhaps his VP couldn’t afford to lose those senior positions for his area.

John came in looking at what he could do to be a hero versus looking at how to work with his boss to help the corporation and his boss.

Check out below to see what John should have done.

What should John have done?

John should have come in and dialogued with his boss on options and asked how that would fit into the whole picture as his boss saw it and what, if any concerns, he would have with John moving forward.

Most likely the boss would have responded well and would have shared that he was afraid of losing headcount he couldn’t get back. Then he probably would have looked at shifting positions around to make it all work.